I think it's fair to say that Max Speed ladder was created for a very specific purposeful reason and not just randomly; namely because people strongly did not want to do specifically snaking, spaceflying or HSSA when playing this game. The Max Speed ladder was and is by far the most popular ladder out of them all which proves the need was there and continue to be there, and that to me is a very valid reason to continue not allow snaking or these other techs in the Max Speed ladder.

I think for a lot of people there's at least intuitively clearly a difference between what superSANIC is doing before his SOSS fast-lap attempt and for example what AfterDawn is doing in his MCSO attempt, even if it's hard to exactly pintpoint what that difference is in words. The challenge as I see it is to find out exactly what that difference is and then hold on to it. Obviously that's not an easy task, but I don't necessarily think it's an impossible task. Perhaps though it's not possible to find a perfect definition to what the difference is, but I don't think that means we should just simply start allowing full-fledged snaking in the Max Speed ladder, because again that's just not the purpose of the Max Speed ladder.

There's also a possible consequence with allowing snaking in the Max Speed ladder: If one feel like it's arbitrary to not allow snaking in the Max Speed ladder based on people simply disliking the tech, then doesn't that mean that one should also agree that it's arbitrary to not allow spaceflying or HSSA? Spaceflying is possible with 100% and is basically just an extension of snaking, and HSSA is basically just taking Side Attacks to the next level by pressing the buttons even faster. Furthermore, if you're okay with reaching that conclusion, shouldn't one also be okay with using the best settings and the best machines to take advantage of those techs as much possible? As a consequence, doesn't this mean that ultimately the Max Speed ladder should transform into the Open Ladder on this viewpoint? Using this way of thinking, it seems to me that if the goal is to set as fast of a time as possible, one should only want to do spaceflying with the fastest machines and best settings when playing this game (and maybe even use a turbo controller) because limiting yourself for some reason or another would just be arbitrary and thus not valid.

I'm curious if you agree with this way of thinking or not. Something tells me you wouldn't be okay with reaching this conclusion, but to me it seems like that's the path it leads us to when looking at your arguments for why snaking should be allowed in the Max Speed ladder.

When I look at it this way, it seems to me that allowing snaking in the Max Speed ladder would make the existence of both the Max Speed and the Snaking ladder completely purposeless.

Spaceflying is personally fine by me because of the No Checkpoint Skipping rule that's already in place.

Yes, in the end, what superSANIC and I would like, the snaking ladder and the max speed ladder are going to have arbitrary rules. We think it makes much more sense for the max speed ladder to be slightly less restrictive. I think a category that allows snaking and perhaps spaceflying, allows settings down to 70% at most (or when the Max Speed color font changes at 72%) is worth being established and it is something I will heavily consider attempting if there are no changes made to the max speed rules. Considering the likely fact that this category's purpose was to not allow snaking, it seems that's the only avenue left to allow snaking with max speed settings unless several notable staff/players express otherwise.

And even if snaking is allowed, I still think a new category worth making to allow 70%-100% settings.

I've read your post many times but I'm not making the jump that you have with how allowing snaking would make both of those ladders lose their purpose when there will always be a setting restriction rule for both ladders.

As for Quick Star snaking in Cylinder Wave, I did some crude testing. While it was predictably faster than non-snaking in lap 1, it's unclear to me for boost laps due to my lack of snaking skill.

And as for lower settings being faster with Fat Shark, I'm fairly confident it would be faster to use lower settings in Sonic Oval after trying it out. Further reasoning to not mess with that rule in this category.

Btw, I just want to say I think you guys rock. It's nice that there's an F-Zero community out there, even if it's small. You have certainly allowed me to understand the game mechanics better and improve my game. As a gamer, one can only show to respect to the level of skill and endurance on display here.

I didn't read deep into the particulars of the last few posts, but suffice to say that with GX it's not easy to draw the line of what's allowed and what's not, due to some of the deeply embedded mechanics.

archiving this since forum sux & jkl is lazy 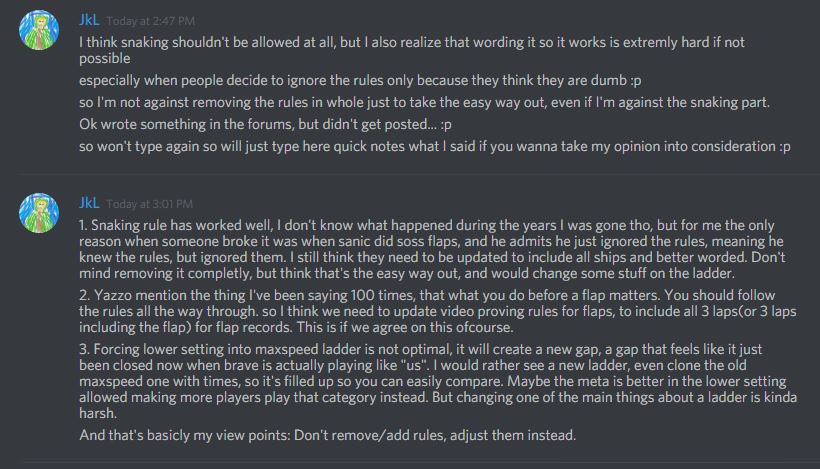 The reasons given to not make any major changes with both the settings and snaking rules are very good points. I wasn't too involved with the rules discussion back then, but I think it's clear that no one wanted to abuse snaking in this category and that should be respected. Not many could have imagined how the meta of Quick Star evolved on how it can basically do better snaking but with many more inputs back then. And we didn't have the knowledge back then to realize that settings down to a certain point (low 70s down to high 60s) does not really help with snaking for any machine. If all of that were known the rules would likely have been slightly different.

Testing shows there are niche cases where using snaking can save a little bit of time at 100%, but nothing major, and at best minimal improvements to the current WRs held by Quick. It would mainly affect machine records for Quick Star on courses where it's not optimal to use Quick Star but that's it really.

The main reason I started this discussion was to encourage further experimentation with settings and snaking motions when time attacking, but at the time I didn't really think that we could simply create a new category. The restrictive nature of the current FZC site perhaps made me think that the rules for the max speed category should be adjusted. With the development of the new FZC site that Yoshifan is working on, I think it would be great if a new category would be made with the rules I've proposed. Of course it won't replace the max speed category, but if it would lead to players, old or new, to play the game more, then it would be worth doing.