^ I'd be happy with those rules / instructions.

Just want to put out a reminder that this poll only decides the fate of F-Zero Climax.

Regarding the possibility of influencing future polls: if there is a future poll for allowing emulator in a different game, and someone brings up "it worked for Climax, do it here too" without mentioning the different situations of game availability and emulator quality, then by all means call them out for it. (Firmly, but civilly, of course.)

i made an append to the rules posted earlier. here it is:

because of the nature of unofficial Emulators, some extra rules are needed to allow times set when using them and prevent abuse or cheating as much as possible.

the following are rules to be followed when setting times in F-Zero Climax while playing on emulator:

- The only allowed emulator as of right now is mGBA desktop version 0.8.x. If a new major version comes out it will first be investigated before being accepted.
- Video proof must capture the entire emulator window, including the title bar which shows the FPS and version number. you are allowed to rearrange the screen layout but there must be at least one window showing the requested information unaltered.
- Video proof is required for top 10 times and the video must be linked in the comments of your submission. videos don't have a limit in quality and at minimum should be recorded using the GBA's native resolution (240x160) and framerate.
- The game must run at full speed at all times. if your computer experiences slowdowns from having many programs open at once, close them until the emulator runs well. if the video causes the slowdown, lower video quality until there's no slowdown.
- You must label your times as "Set on Emulator" and include "mGBA [version]" in the comments of your submission. if all your times are set on Emulator, write "All Times Set on Emulator" within your time sheet.

And furthermore, instructions for setting up the emulator:
1. Download and install an allowed version of mGBA at https://mgba.io/downloads.html
2. By default all settings are correct, but ensure the following:
- Frameskip is set to 0
- Ensure cheats are disabled / there are no cheats loaded
- Do not bind autofire to prevent accidental use
3 (Optional). If you want to use an existing save data with everything unlocked, you can download the following file and place it in the same folder as your ROM with the same name as your ROM https://drive.google.com/file/d/16BbTwqw1vAPY2U8EUfa3ueQ0g-h2BJOz/view?usp=sharing

Just curious, how was this decided in the end? Did "Staff Ghost"/council members discuss/vote in some sort of backroom? Or are we going by the poll in this thread?

going by the poll and discussions.

This would be an important setting to change right? By default it was set to 60 for me. 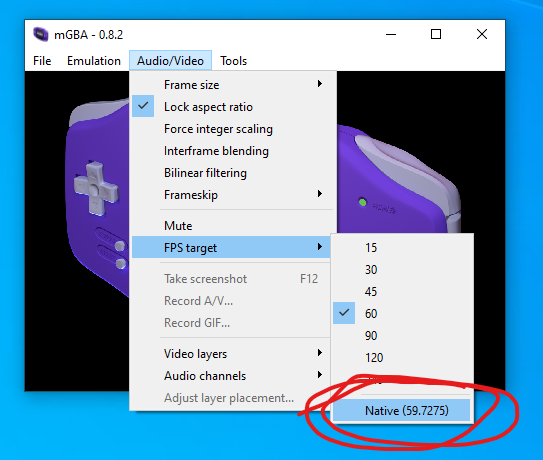 Also what about emulators like Bizhawk or RetroArch that use the same mGBA core.

I've added the FPS target thing to the rules. It's a minor thing, but yeah, that should be used.

Bizhawk is a great emulator, but is also made with TASing in mind and has many TASing tools available, making it harder to ensure it's not actually playing back a TAS. Unsure about Retroarch, but I also feel like that complicates things. Idk how clear it is which core is being used, and if it has any extra tools that would compromise integrity. Worth looking into, but until then it's not accepted.

I gave it a week to mull over my thoughts. My opinion hasn't changed, I cannot condone this desicion.

It is quite frankly embarrassing, a kid that was banned from the Mario Kart player pages for cheating has instigated this change to our rankings. I find some of the posts in this topic very offensive and disrespectful to the community which has been going for a very long time.

I've set all my Climax times to default 5'00"00, I hope an admin will remove all my times from other F-Zero games.

All of my times will remain on Cyberscore, which maintains rules which I respect.

...You know, I can say so many things....unlike you I will keep it to myself.

However I must say...it wasnt my idea, it was by the Climax players, they wanted it and got it, trust me I can post a whole damn essay where I vent out but I will try my best not to do that

At least you kept your times on cyberscore, thats all I'll say

Also, since you all have such a bug problem with me being here (Manda isn't the first to say this), fine seeya (dunno for how long)

Whether or not someone cheated in the past is completely beside the point here. Decisions like this should be made based on the merits of the arguments put forward, not the person the arguments are coming from. To decry disrespectful posts while making a comment like that is a little hypocritical.

I was pretty neutral to this topic, but ended up voting for emulator to be allowed. The reactions of some people on the "losing side" have been pretty disappointing, but it should be said that this discussion could have been handled in more transparent way. Going by the thread, even I don't really understand at what point the decision was reached, or by whom. Valyssa put forward an idea for what emulator to use, apparently solving some of the "cheating would be too easy" arguments, but quite soon after that Uchiha posted a set of rules which made it seem like the decision was already made. (This is evidenced by astro's reply to Uchiha's post.) It seems that at least opening the floor for opinions on Val's solution would've been a good idea, before then moving on, or at least clarifying after astro's post that the decision hadn't yet been reached, if that was the case. I can only guess that discussion on Discord played a part in the decision, too, but there's something to be said for decisions like this (and all the relevant arguments) being done "out in the open" in a thread like this.
I'm not sure I have a better solution, but putting any real weight in the outcome of a poll also seemed a bit iffy. Aside from it being relatively easy to manipulate, especially in such a small community, I don't think it's fair that someone like me, who has no intention of running Climax, had as much of a say as someone who does. To use an overblown example, it's like if I was able to vote in the US election despite not living there. It doesn't matter how well-thought out my opinion might be - I'm not the one who's gonna have to live with the consequences.
Having said that, the lack of any real meat to the anti-emulator responses is kind of what swayed me in the other direction. Even if everyone thought the decision was already made, it's bizarre to me that runners who feel so strongly about banning emulator did not make a single counter-argument to the idea of using mGBA, seeing as it was put forward as something that solved the cheating issue. If your argument is "well, I don't know anything about mGBA", then why should I take your position seriously if you're not willing to put in any kind of research? It's baffling that people care enough about this to delete their times in the aftermath, but not to put forth detailed arguments when it seems like the wrong decision is about to be made. As it is, this thread just looks like "varied arguments about whether emulator should be allowed" > "solution proposed for allowing emulator in a fair way" > "no counter-arguments made and decision inevitably reached".
Sorry, I realise this post is kind of a mash of points and that there's nothing to really be done now, anyway. I just think that if there's a similar situation in the future, being a bit more structured and transparent might lead to less of a fallout.
FSF Returns
Fire Stingray
Posts: 129

Okay, I'm not usually the kind of person to write things like that, but I couldn't just turn a blind eye on what happened here.

It's one thing to uphold traditions and not break them. I understand that. But it's another to be a total prick to one of the players pushing for the tradition break by bringing back something they did in the past that HAD NOTHING TO DO WITH WHAT'S GOING ON RIGHT NOW.

Is it so troublesome for the players who are against emulators that others might want to get up in that nest of the select few people who actually have a physical copy of F-Zero Climax, and instead of welcoming more people, they need to feel almighty about it and shun upon others like that ? It's like the rich people kicking the peasants back down their village because they're not worthy in their eyes.

To reiterate : rulings are being made so Climax can only be played in (as of current) only one emulator with particular settings and being recorded in a very specific way so that no cheating is shown. Heck, some of the older players even helped making those rulesets for this particular case.

Don't get me wrong : I know cheating is bad in speedrunning. And I know full well emulating a game for the purpose of speedrunning can open up potential problems with cheating concerns. But doesn't speedrun.com have people tasked with verifying runs ? We can give trustworthy players such a task if this become necessary in the future.

I haven't run a lot of games these last few years, especially regarding F-Zero as a whole so I can't call myself a recent runner (real life stuff getting in the way, the usual). But I'm glad I can call myself a human being for having the ablity to accept that others who may or may not have done bad deeds in the past can reform, and not an elitist who'd spit at the people who makes the slightest attempt at giving others an easier access to a game almost nobody runs because of old traditional rulesets.

All I'm saying is that if you're going to protest new changes in rulesets, at least don't be petty to others about it. Please.

Faizer I apologise for making it personal, I shouldn't have done that.

about the discussion seeming to jump fast between decisions, a lot of the talking was done in the discord server and that gets lost over time due to how discord works.

it would have been better to post all the various stages of discussion over here to show people things were actually discussed for a while but few people like using the forum.

it's something to keep in mind for the future. when we have to make another decision, more effort will be put into posting the discussion here in the forums (even if it's just by making screen captures of discord convos)

I'm really sorry everyone, I acted very rashly earlier. I've been here a long time and care about the place a lot. It wasn't my intention to insult or disrespect anyone, I was just very angry with this whole topic.

I'll re-add my times and leave it at that.

I just wanna say I didnt want anyone to lash out at Manda. That specific thing has just been building up for months now and he just chose poor time to mention it (that and its got nothing to do with Emu)

Im back thanks to a bunch of people, hopefully it doesnt happen again

I re-added Mandalore's times from a database backup.